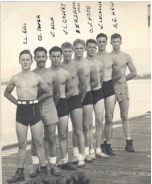 WE LOVE REPRESENTING VETERANS AT THE VICKARYOUS LAW FIRM!

So many veterans have had an impact on our firm in so many ways. One WWII and Korean War veteran that had a big impact on my life was Coach Robert Hech. I walked onto the high school football team as a freshman without any experience. Coach Hech and the rest of the staff were frustrated, as they knew I was not hitting hard enough. One day Coach Hech had me line up against him for a hitting drill. I had all my football gear on. He was wearing shorts, a t-shirt and took his hat off as he got into position on the other side of me. Before the whistle blew, I knew something was up, as I watched the muscles twitch under the “USMC” tattoo on his arm. One second later I had been put on ground by a guy pushing 60. Coach Hech didn’t give up on me, and in two months I was hitting like a champ.

Like most vets of his generation, he rarely spoke of his service. He made an exception one Friday evening on a bus ride to play a game against a much bigger and better rival. He could tell we were all worried and needed a pep-talk. He told us that it is OK to be worried about a tough rival, that it gives you more will to fight. Then he told a war story. He was in Korea with the First Marine Division when it was completely surrounded by Chinese communist forces. At first, they all thought they were finished. They barely had enough bullets to fight. They dug in and through sheer will repelled wave after wave of attacks over 17 days. They were re-supplied by air and fought their way back to the rest of the American forces. His message to a bunch of young boys: If you fight hard enough, you can win against even the most overwhelming of opponents.

Coach Hech has a living history webpage put together by the Collier County Government.  There are some great pictures and a number of interview snippets that give you a sense of the man.

The photo at the top of the post is Coach Hech (far right) and his USMC (United States Marine Corps) championship boxing team. After winning the championship, he was presented with the trophy by the future President Gerald Ford (he was in the service at that time too).