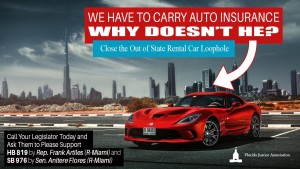 A loophole in Florida law allows rental car drivers visiting from out-of-state to avoid providing proof of insurance when renting a vehicle.

Millions and millions of visitors to Florida rent cars. A fair portion of them don’t have insurance or allow drivers without insurance to drive those vehicles. The result is innocent people are seriously injured or killed.

Our client, a veteran, sustained serious shoulder injuries caused by an out-of-state rental driver. He is the classic Graves Amendment tragedy: $10K from the driver’s insurance and NOTHING from the rental car company to cover six-figure medical bills.

In March, two lawmakers had pushed for legislation that would close this loophole. House Bill 819 introduced by Rep. Frank Artiles, R-Miami and Senate Bill 976 introduced by Sen. Anitere Flores, R-Miami, would have mandated rental car companies to either verify coverage or require out-of-state renters to purchase insurance in order to make certain the vehicle is covered in the event of an accident.

Right now, people are given the choice of whether to purchase insurance when renting a car and most people say no. Most people make this decision because they either have their own insurance or (wrongly) assume the rental car company will be responsible to cover the damages.

In a normal situation, this would be the case. Florida is among many states that have a strong case law for vicarious liability for auto accidents. A motor vehicle is considered in this state to be a dangerous instrument, and as such, if an owner of a vehicle loans it to someone else, they are responsible for any injury that may result from its negligent use. The general idea is that people will be more careful about to whom they lend their vehicle.

But the rental car industry isn’t subject to that same kind of liability. Their lobby, which is especially powerful here in tourist-dependent Central Florida, pushed hard for the passage of the Graves Amendment, and consequently amounted a substantial opposition to these efforts which resulted in stopping the passage of the bills.

Still, we must consider what is at stake. One of the cases cited by lawmakers as a prime example of why this measure is necessary involves a 30-year-old small business owner, Anthoney Belfon, husband and father of two. One day in the summer of 2008, Belfon was driving when suddenly, a person driving a rental car bolted from a nearby parking lot driveway and straight into oncoming traffic. Belfon had no time to react, and slammed into the side of the rental car. The force of that impact was so severe, his leg was crushed, and doctors were forced to amputate above the knee.

The driver of that rental car was from out-of-state, and he did not have a valid driver’s license. He had been loaned the rental vehicle by the original renter, who did have a license, but who opted not to purchase insurance offered through the rental company. Because the original renter’s insurance would have only covered the accident if he were driving, there is no avenue for the driver to recover damages, except to sue the driver individually.

Mr. Belfon, who has never used lawyers or asked the government for help, obtained coverage through his own uninsured/underinsured motorist coverage policy, but amounts of recovery on those policies were limited and not to the amounts to cover his catastrophic injury. Belfon literally cannot afford the proper prosthetic leg and hobbles around on a rickety pair of crutches.

That’s why this law needs to change. It didn’t happen in March, but we can continue to educate the public. Car rental companies could easily initiate this action with little impact to their business. Any losses in customers could be attributed to those who should not have been allowed to put other Florida motorists at risk in the first place. You can protect yourself by carrying uninsured motorist coverage on your car insurance policy.

Our law firm is devoted to helping our Central Florida area neighbors receive the reimbursement they deserve when they are hurt by the negligence of others. If you have any questions about accidents in rented cars, The Graves Amendment, or carrying uninsured motorist protection, please call Vickaryous Law Firm, Lake Mary Personal Injury Attorneys, at 1-407-333-3332.